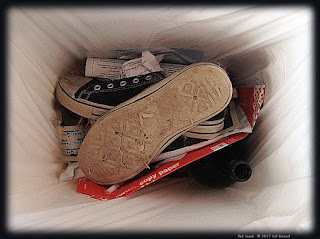 There is something sad about trash. I mean, besides the business of abusing the planet. Trash is clearly the unwanted stuff of our lives. The broken bits and pieces, the used-up dregs.

There something about throwing out shoes that is sadder than tossing other stuff. I don't know why.

My poor sneakers are worn down to the point where the soles have cracked. I stopped wearing them because I got tired of pebbles and stickers and other irritants working their way inside and making me hobble like I was the walking wounded. They've been sitting on the floor for months now, waiting for me to move them out of my life.

Really, how hard could it be to just toss them? But no, not me. I've got shoe guilt. Not as bad as, say, putting down an ailing pet as a mercy, but not as easy as yanking up a weed in the flower bed.

They're in the trash now. I am resisting the urge to pull them out, give them another chance. There's only one way to make sure I won't, and that is to put other trash on top of them so I can't see them anymore. I swept the floor. Put the contents of the dustpan on top of the sneakers. It felt kind of like throwing the first handful of dirt onto the coffin.

I think I've done all I can for them now. I'll just have to let them go.


Posted by Mage Music by Lif Strand at 5:32 PM No comments:

Everything I learned about keeping house I learned before I was 12. After that age I was was dead set against having anything further to do with the topic. I didn't want to starve or live in a disgusting cess pool, mind you. But I also figured I that knew enough to get by and anything else I could just fake.

Fast forward a bunch of decades to today. My mind hasn't changed one bit about housekeeping. Time has only made me less interested in cooking and more tolerant of my mess.

However, there are housekeeping things in life that Must Be Done.

When the ice in my propane refrigerator began to encroach on the items on the top shelf, I knew I couldn't put off defrosting any longer. I had always had self-defrosting fridges, I guess, but when I moved here to New Mexico we weren't on the grid. No ready supply of electricity. So we got an ancient propane fridge. That one started to give up the ghost a few years ago when it was nearly 75 years old (it was a 1942 model), so last year I traded it plus cash for a smaller and newer (read late 1950s model) Servel, the one I now have.

The first one's door was a little askew plus the door latch had fallen off not long after we got it so a bungee cord held it closed. Hey, I have no pride. The door was so leaky that the freezer didn't really work. It generated cold enough temperatures, but the freezer would simply go straight from defrosted to block of ice. So I let it do what it wanted. I didn't have to defrost it (I occasionally chipped off ice chunks that got in the way), but I also didn't have a freezer to use. A person can live without a freezer, by the way.

My "new" fridge is more airtight. The freezer works just fine. But, alas, it needs periodic defrosting.  Like right now.

I kept putting off the inevitable, but one day when I reached for a bottle on the top shelf and the glacier from the freezer had just about fully embraced it, I knew the time had come to do the deed. Defrosting. Anyone can defrost, right?

Amazingly, when I got this second Servel, it came with a manual. Please review paragraph two, above. I have no idea where that manual might be. Possibly in the file folder labeled "Manuals", but unfortunately I can't seem to find the folder.

But really, how hard could it be to defrost a freezer? The dial on the bottom even has a setting for Defrost. So hey, I emptied the fridge into cooler chests, turned the dial to defrost, opened the door wide and waited for warm air to do what comes naturally.

Chunks of ice are frozen water. You know that. I know that. But it kind of escaped me that when large chunks of ice melt there will be equivalent amounts of cold water congregating somewhere. The volume of the ice mass was larger than the tray under the freezer compartment. So naturally it would overflow if not regularly emptied.

So this morning a bunch of time before coffee was spent mopping up the floor and using a sponge to collect the water that had accumulated in the bottom of the fridge compartment. I now have two very clean places in my house, so that's nice.

Also this morning there was still a whole bunch of white stuff on and in my freezer. 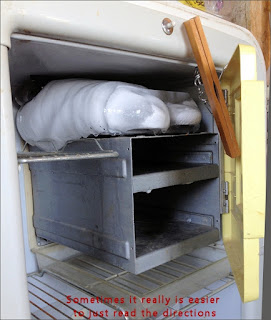 Did your mother ever nag at you to stop picking at that? If you were a kid, it was usually a scab. There are some things in life that just need to be helped along. I don't know if my freezer door already had gouges and scrapes on it, but now it does. They're from the kitchen knife I used to break off chunks of ice. That's because I wanted to hurry the defrost along by wedging open the freezer door with a pants hanger. I thought the hanger would work nicely because it was more compact.

About an hour ago, after having emptied the pan yet again, I realized it had been 24 hours since the start of this project and there was still a large iceberg on top of the freezer unit. Not that I'm any expert on defrosting, but that doesn't seem right. And why was the fridge running constantly if it was on Defrost? How long was this going to take and at what point would I have to just throw out all that food in the cooler chests?

It was time to get serious. Time to [gasp] Google it.

I'm going to cut to the chase here. I admit I was doing it wrong. I'm going to just copy and paste the perhaps obvious method for defrosting a refrigerator that has a Defrost setting.

As close to automatic as it gets
In order to defrost, all you need to do is turn the temperature thermostat dial to a minimum setting in the evening and in the morning the frost in the fridge will be defrosted and drained through the above process. At this point in time all you need to do is turn the thermostat dial back to where it was prior to defrosting. No need to empty the contents of the fridge. No need to turn off the unit. No need to use a hair dryer or hot water to defrost. This is why we call it the EZ-Defrost System.

Note: I want to be fair to my mother who must have had to defrost her fridge when I was a kid. I think I must have hidden in the closet when she did it.

Posted by Mage Music by Lif Strand at 3:10 PM No comments: