Part 2 of the series.  Go to Part 1
There’s summer, with day after day of clear blue skies, white hot sun beating down, so dry that you don’t even sweat because any moisture you produce evaporates before it can bead up. Every afternoon you bless the shadows that are finally cast, shade that feels cool in comparison to earlier in the day, even though it’s still in the high 80s in the shadow. All that wind from spring is gone and you wish it back, you welcome the slightest stirring of air to provide some relief from the searing heat.

That’s summer. And then there’s high summer, when we have rain. The brown grass turns a verdant green, a riot of flowers are heavy with pollen, lush fruit ripens and bends the stalk. That’s now.

I’m sitting in my car, engine off, waiting for my friend to meet me so we can car pool to town. Everyone car pools around here – or at least the women do – partly to save gas money and partly because most people prefer to have company when they drove a lot. I don’t – I do some of my best thinking while driving – but the gas savings is still important, and my friend generally prefers company when she drives.

It’s pouring rain. The sky is blue in two directions, black in the other two plus overhead. It could only be the Southwest in monsoon season - July, August or September - when sometimes it rains on a cow’s left horn but not on the right.

Living at the end of a long dirt two-track means extreme planning for at least two seasons:  High summer (now, the rainy season) and dead of winter (January through March, when there’s the most likelihood of snow and ice). Our soil here has a high clay content – slick snot when it’s wet. It’s amusing to see the tracks of vehicles that have gone before you, leaving the wandering tracks across the road like a drunk driver's, maybe even with the bonus of a gouged rut in a ditch where the car or truck slid off the crown. It’s entertaining – until it happens to you.

So you plan. You avoid driving when it’s actively raining and for a good half hour or more after. You watch weather reports so you can get out and back while the road is still a road and not an amusement park slide. You make sure you’ve got enough supplies to last at least a week, preferably two, in case of flooding when the road can be bad for days in a row. In the winter you get out while the road’s still frozen, come in after dark when it freezes up again. 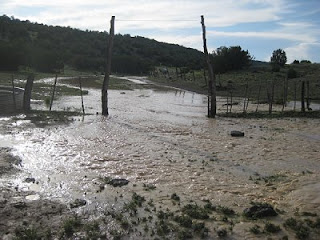 The thunder is moving on; rain now just a light shower. I wouldn’t risk driving the two miles home from here right now if that’s where I was headed even though the road surface doesn’t look all that bad. I know that’s deceptive, and that within just a few feet the tire treads would be packed and the rubber coated half an inch or more with clay. I can see from here the first spot where I’d be sweating it, a very slight curve around a juniper tree – just enough for me and others to slide off the edge. It happened so often I finally took a chainsaw to the offending branches, but it’s still not a straight shot.

There are a few other spots after that – one place where there’s a slight bump, another couple areas where water pools a foot deep, creating an additional twelve inches of mush at the bottom. All fixable if I owned the road, untouchable as BLM property unless I jumped through some expensive hoops and put myself in a position of public liability. No thanks. I’ll risk the drive as is.

In spite of all the planning, the four wheel drive, the mud tires, I still get stuck every so often.  I never know until I turn off the engine if I'll make it home if I try at the wrong time.  Last week I had two close calls driving in with a load of hay. The road at those places looks like a tank battle took place – and it was a battle of sorts; my skill vs. the mud pit. That time I got out, but it was very close.

You’d think that going home would be easier since it’s downhill, but when I get truly and deeply stuck, it’s always in the downhill direction. That's why I always carry a tarp for the hay – not just to protect the load from rain but from cows, too, if the truck has to be abandoned.  And that’s why I always carry rubber boots and a rain coat.  Even though I'm usually not a happy camper when I first start the hike back, my boots picking up the same clay that the tires would have and making them dead weights as I slog through the muck, by the time I've gone a little ways I'm at peace again with the world.  I love high summer.
Posted by Mage Music by Lif Strand at 2:20 PM