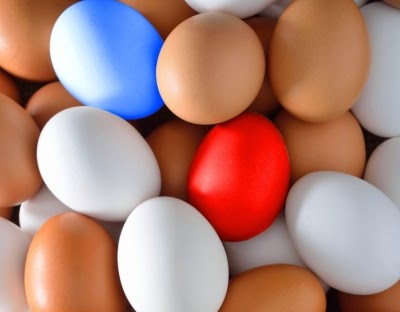 When I grew up we had a bunch of chickens. There were white ones, black ones, wild ones , gentle ones. They ranged out 2 or 3 hundred yards, scratching around, hiding their nest in the bear grass and surviving.

Everyday was an Easter egg hunt. The eggs that our hens produced were a lot like people. Our eggs were not like a carton bought at the store, all so equally matched in color and size. The outer shell was every color from white to dark brown, but those eggs were all alike inside. Well, except once in a while one would have two yolks. Other than that if you cracked a white one in the skillet and a dark brown one in the skillet by it, and did away with the shell nobody could tell which egg was which.

Then there were special eggs. Sometimes in the early spring, a hen would lay a tiny egg. That pullet's first egg could be as small as the first joint of my thumb. If the timing was right that tiny egg would be boiled and died for Easter to be the PRIZE egg of the egg hunt. I remember several of those tiny eggs.

The other rare egg was an occasional soft shell egg. The membrane kept the white and yolk contained, but the egg had to be handled carefully, as there was no outer shell.

I see those soft shelled eggs in humans also. Some of them get their feelings hurt, so easily. They seek to create drama. We have to handle them carefully.

But we are all eggs in the basket together. White, Brown, Special, Soft shells, Remove the shells and we are all just big gooey messes.............