Summertime and the living ain't easy 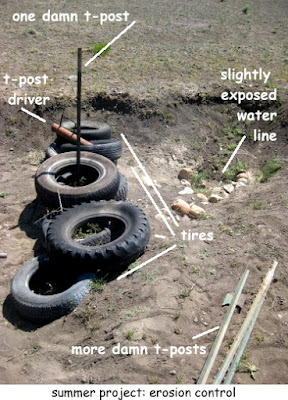 This morning started out so well. After completing my regular chores I decided to tackle a task I've been putting off for a while. I've got a spot where summer floods have caused enough erosion to expose water line, and I've been avoiding a real fix by having a neighbor come over with a dump truck load of fill. But every summer it rains again and the valley floods again and the fill washes away. This has been going on for several years.

Some months ago I decided to get going on a permanent fix. I placed old tires in the gully, overlapping them on their sides. My plan was to anchor them with t-posts and fill them with rocks, the manual labor for which was not much fun.  After moving the tires I decided I had achieved enough for a while.

Well, now that summer is here the monsoon rains can't be too long in coming. The floods can carry stuff for miles and miles so if I don't get those t-posts in the tires will be gone. The tires aren't worth anything so they'd be no great loss to me -- there are plenty more where they came from -- but they would be litter for someone else. And besides, that would be more work for me.

Last night I woke up in the wee hours worrying about all the stuff I hadn't done that needed doing before the rains start. Top of that list was the erosion problem. I decided I'd do something about it today, and I promptly fell back to sleep.

This morning I remembered my decision and went at it. As you can see from the photo, the project is still in process.

I've just put arnica salve on my left foot where I dropped a t-post on it. I don't know why that's the foot that hurts so much because I dropped two t-posts on my right foot. But hey, the posts only fell a couple of feet - it could have been worse.

My back hurts, too. I got one post in. I guess if I was a buff young cowboy I'd have gotten them all in, but I'm practically an old lady, fer cryin' out loud. I'm proud I can lift the damn post-hole driver at all, much less pound in a post. One at a time is good enough progress for me.

The big question is: will I sleep better tonight or will I be forced to promise myself to pound in another post tomorrow, too? I hope not. I've got weeks and weeks till the rains start and finishing the job now would be so counter to the whole mañana ethic of my life.