Oh no! Not fry bread! 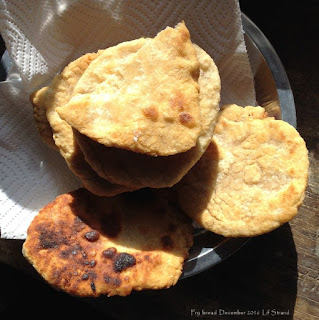 Yes, friends, once again I'm attempting to do this thing called "cooking". In this case, it's deep frying, and the idea was to salvage a lump of flour and yeast that was supposed to rise into a glorious sourdough to be baked this morning.

But it didn't.  Rise, that is.  I should have taken a photo of the lump, but really, it was too embarrassing.

So. About the bread loaf that wasn't. I've gotten to the point where I can make a quite acceptable loaf of regular bread, but given that I'm using sourdough starter to do so, the result has been a big disappointment to me.

Internet research reveals that one method for getting a more sour flavor is adding some rye flour to the starter. OK, I did that. The effect of rye flour is supposed to be like candy for a toddler. It's supposed to make hyper starter.

My starter looked and smelled pretty much the same after dosing it with rye flour.

Another trick is supposed to be maintaining a drier starter. My starter is like batter, but some people's starters are like, well, lumps of dough.  I chose a consistency somewhat in between.

Anyway, being me, I didn't go at this scientifically. I used rye flour plus I made a sponge that was less like batter and more like really soft dough. Um... was the sponge the part that was supposed to be drier? I can't remember. I used about ten different sources for this experiment and they kind of got mixed up in my head.

Should it have been a clue when, after 10 hours, the sponge was more or less just sitting there? Like a lump? Possibly. Nevertheless, I went ahead and added more flour, kneaded it, put it in the bowl to rise so I could punch it down in another 10 hours.  Making sourdough isn't a speedy process.

When I punched it the next morning, it didn't even twitch, much less sag. Very tough bread dough. Hmmm. I figured I'd give it another 10 hours to get a life.

I was sad to be unable to detect any signs of life.  This morning I was faced with the option of just throwing the lump out or doing something else with it. That's when I came up with the idea of fry bread.

Not a slice of bread that's fried (like French toast) but dough that is cooked in oil, shortening, or lard, rather than baked. Not exactly healthy but hey, the fry bread I've had at pow-wows and various fairs in New Mexico is darned yummy. Really, it would be like making a stiff pancake, I figured.  How hard could that be?

I don't have any lard. The very word sounds nasty to me, and I know where it comes from. Ewwww. The white pasty glue-like look of shortening is icky, too.  But oil?  I've got oil.

I used virgin olive oil. Maybe I'd end up with a non-traditional taste, but then I don't think fry bread usually is made with sourdough starter, either.

I tend to go through a bunch of recipes and pick the parts I agree with most and then combine the parts.  Just sayin'. The fry bread recipes I looked at said to use lots of oil. Deep frying, you know. Yeah, well, they weren't using expensive olive oil, either, so I poured about a quarter inch in a small cast-iron pan and heated it up.

Meanwhile, I mashed a smallish ball of dough (a couple inches in diameter) into a flat disc. I fancied myself patting it into a tortilla sort of deal like a pro. I'm pretty sure I got all the cat hair off of the ones that I dropped. Never mind. The hair would be sterilized in the oil anyway.

And then I cooked them, one by one.  It took a long time.  The whole house still smells like fry bread and olive oil.

The end result: Not bad.

NOTE:  Don't try this at home, kids, not if you want traditional fry bread. Dense, really sour disks of cooked dough aren't for everyone. But boy howdy, they do taste good with peanut butter.

Posted by Mage Music by Lif Strand at 1:57 PM