Photos: Around the ranch

Last week it rained 3/10". That brings the precipitation up to nearly an inch since the first of the year, meaning it's dry, dry, dry. It also means when it rains that the soil turns to snotty clay-mud. I had been out of town that day when I came home to 'running the slick', as I think of it. The two mile of unimproved two-track from the county road to my property is always a challenge when there's been even the slightest bit of rain (snow's not quite as bad until it starts melting). So nearly a third of an inch of rain was quite enough to make my pulse rate rise, because I just do not like having to walk home in the mud (something I've done quite often enough, thank you very much).

I know where all the places are that cause trouble. The ones where I have to drive slow or risk spinning out. The ones where I have to be moving along at a good clip or I'll sink in. And then there's the spots where nothing works, and last week I did a bit of slip-and-slide. I managed to not get stuck and only had another minor slide after that. By the time I got to my gate I was feeling pretty proud of myself.

Until I saw a mass of wire trailing behind my car.

For all the cattle fencing out here in the West, you'd think cows would stay where they're supposed stay, but they don't. They're always seeing better graze on the other side of the fence, and they rarely meet a fence that they can't get through if they really want to. Consequently there often will be long strands of barbed wire curled into a coil or a wad of crumpled field fencing out in the middle of a pasture, the result of a cow going through a fence and taking the fence with her.

I must have slid over one of those wads, which hitched a ride on the drive shaft of my car. 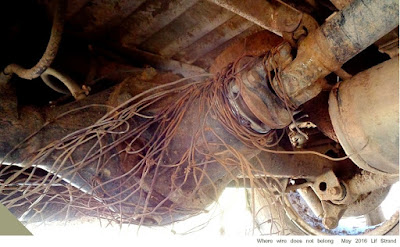 I didn't even look at it till today. Partly because I was busy, partly because I knew that even using bolt cutters I was going to end up in a bad temper working the wire off. It was a trial, let me tell you. Trackers are little cars with not a lot of clearance underneath - better than a sedan, mind you, but not like a truck. There wasn't much room to maneuver plus there was dried mud in just enough places to fall into my eyes and ears whenever an arm or shoulder bumped up against it.

Stuff like this is pretty normal for out here in the middle of nowhere. A person has to be able to handle little things by herself or else she should live in a city where help is just minutes away. But she doesn't have to like it.

Is there an emoji for a snarly face?  If so, imagine it inserted here.  I don't do emoji.

Here's a photo of PJ Kitty (Papa J) in the alpenglow a couple nights ago. Makes me feel better just looking at him. 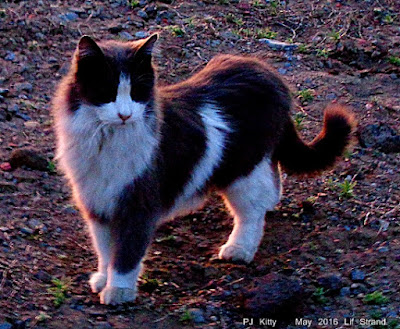 And here's a sunset photo from the next night. The delicate silhouette of the juniper against the flaming sky gets to me. 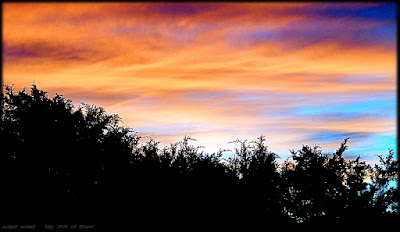 Posted by Mage Music by Lif Strand at 4:15 PM