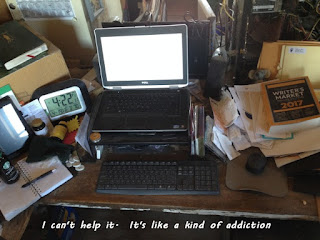 This is my desk. I didn't set it up for the shot. It is what it always is, except that occasionally things get moved or replaced.

Over on the left almost out of the picture is bottled Starbucks coffee. In the morning it'll be brewed coffee, with the bottle for later if the French roast wasn't enough. If I develop caffeine jitters I'll change over to room-temperature weak green tea till it's time for my evening glass (or two or three) of Merlot. Unless it's a hot day and then maybe a beer, though not often 'cause I'm not much of a beer drinker.

You'll note the coffee is sitting on top of my day planner. I'm very good at writing things down in the planner, not so good at paying any attention to what's scheduled. Quite often there are coffee rings on the pages. I can't explain it, but there's something about the warping of a day's page from the dampening and drying that I find attractive.

Behind the planner and the coffee is my Kindle. Mostly it's off, but there's always one app running in the background -- it's called Ship's Clock and it's the coolest thing ever. It chimes every half an hour, emulating the old fashioned sound of a ship's bell that regulated the sailors' duty watches (do ships still use those bells? I don't know). It took me a long time to learn how to tell time with it but I can do it now. Except that if I don't pay attention I don't even hear the chimes. But I like it anyway.

I've got an atomic clock because otherwise I'd never know what day it was, or month, or the date. I have to check that clock before I look at the calendar on the wall because come on, if you don't already know what day it is how can you tell from a calendar on the wall? Sometimes I need to know what time it is in between bells, too (and yeah, sometimes I need to know what time the bells are supposed to be telling me).  The atomic clock provides temperature too, but my laptop's fan blows on it so it's not reliable. Besides, I'm sitting in the house -- I can feel what it feels like in here without help.

Vitamins and other supplements. Those are empty bottles waiting for me to remember to reorder. I really should get around to it.

Rune stones. Why? I don't know. They seem cool. I'm no good at reading them (or tarot cards or any such predictive tools), but I could learn if I keep at it long enough. After all, I learned the ship's clock. The meanings of the runes are in my Kindle. Handy device, the Kindle. I hear a person can read books on it. Just kidding -- I do occasionally do that, but ewwww. Books on a little screen? Give me paper any day.

The laptop's on a metal stand. The theory is that the metal will help conduct heat from the laptop. Seems to me it gets awfully hot anyway. On either side and behind the the laptop are my speakers, and hidden behind the laptop is the monitor for my XP machine, which I can't quite convince myself to get rid of. To the right of the screen is the ailing, failing desktop computer tower. It's hard to see because of the stuff leaning against it. I do remove it all if I turn the old computer on, but that happens less and less anymore.

Do you see the cute koala bear peeking up from behind the papers? I don't recall where I got it but it has to live on my desk. I don't know why. Poor thing is buried in old mail and project binders. My theory is that if I have them nearby, I will someday open the envelopes or the binder covers. In practice I only do that when I get a threat about a bill that's due, or if a deadline for a project is fast approaching.

I've got a half dozen CDs waiting to be ripped so I can listen to them. I'm using MediaMonkey nowadays instead of iTunes. Mostly because I resent the lack of flexibility of iTunes. Apple so thinks it is better than everything else. Sorry, all I want to do is be able to find the music I've got in my computer and play it. I don't need your proprietary smugness, iTunes.

There's my daily journal and my moon phase calendar. There's a drawer under the laptop with a bunch of cables and lip balm. Somewhere under everything should be my Passport external drive. Hmmm. Haven't seen that for a while. But it's there, I'm sure.

The Writer's Market. But of course. Because someday I will actually need to market some of the stuff I write. But not today. Why? Because it's scary. Because it's hard. Because I have to clean my desk before I can get serious.

Posted by Mage Music by Lif Strand at 5:50 PM