Not just your mother's potato salad 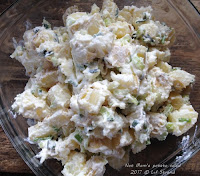 Making certain old standard dishes at my mother's house is a risky business. You know the dishes in question -- comfort foods, the dishes that always remind you of home and family and good times (whether they were truly good or just in selective memory). These foods vary from culture to culture, from family to family. For me, it's turkey stuffing, mac and cheese, meatloaf, bow ties (a vaguely Italian dish named for the pasta that is used), potato salad. These are foods that never taste quite right at your best friend's house, or the way your mother-in-law or your neighbors make it. No restaurant makes those dishes properly.

It is potato salad of which I write.

Let me start in the beginning, which is the logical place to start. Logic ends with that point.


It had been springtime here in New Mexico. I could tell because the calendar said it was late April. Not only that, but one of my apple trees had blossomed (unfortunately not the self-pollinating tree). It was a glorious display. My asparagus had sent up the first spears and I greedily ate the raw shoots moments after harvesting, because that's what you do with the first asparagus. Birdsong filled the air as they hunted for mates, flies buzzed around the horses, and the horses' tails were working as their winter coats flew off, hair by hair, into the warm breezes.

One afternoon when it was almost hot and felt kind of summerish, I got the notion that I had to have potato salad. Just like Mom used to make -- the only way it can be made, after all. The next time I went into town I bought a bag of organic Yukon golds. I couldn't make the dish right away, as I had to be out and about too much over the next few days, so I stored the potatoes in a cool, dark place till I needed them.

For three days I thought about potato salad, because it was spring.

Then it wasn't. New Mexico changed its mind. The thermometer dropped to 10° overnight. A frigid wind blew through my valley straight from the North Pole, not even pausing at the spaces in the wall of my cabin. I had to build a fire in the wood stove, the first time in weeks. Fortunately I hadn't gotten around to moving the logs outside yet. Procrastination does have value.

By morning there was a few inches of snow, and though the sky was blue at that point it clouded over shortly and snowed again. Several times.

Somehow the notion of making a batch of potato salad wasn't as attractive as, say, a hot pot of thick potato soup. Not that I made the soup. I made cornbread instead, but that's another story.

And thoughts returned to potato salad. I decided to go for it.

Mom's recipe is pretty simple, but it must be exactingly followed. That's the risky part about making one of these family recipes if you're at Mom's house. She wants it to be made just like she has always made it. And so does the rest of the family. No fooling around. No experimentation. Just tried and true.

If you've read other stories of my cooking here, you no doubt are aware that following directions is not exactly my thing. I wasn't at Mom's and what she didn't know wouldn't hurt her. Plus I didn't have all the ingredients.

I'm sure you're wondering how that could be, since I had been wanting the potato salad for a week and I had been to the grocery store in that time. I can only say that I didn't feel like buying mayonnaise. I rarely use the stuff and so any leftovers after making this recipe would just go to waste. I figured I could fake it. That's pretty much my approach to life anyway, so why not with potato salad?

Why go by the rules when you can invent something new? Choosing a route off the beaten path is always entertaining. Yes, there's the risk of getting lost, of attacks by dragons or saber-toothed tigers, of death rays and carnivorous plants, quicksand and... you get the picture. But adventure! Excitement! And the possibility of treasure.

No different with cooking, though that's just my opinion. I've had my failures (I just threw out a batch of sourdough that refused to rise and was sad that even after a second chance it chose to remain a lump of flour and water). I've had some dubious results that probably no one but me would like. But sometimes... treasure!

Okay, today's potato salad isn't everybody's treasure. For one thing, I don't put sugar in it, for another -- faked ingredients. But I did have potatoes. And celery. That was a good start, right?  The rest of the ingredients were what I had in my fridge and in my garden that survived the snow.

Ingredients (all organic)
[EDIT: 05/01:  Last night I decided the recipe would benefit from some olive oil, since oil is one of the ingredients in mayo.  So I did add a splash or two and that gave a richer taste.]

Note about Icelandic yogurt: It was in the grocery store and I hadn't seen it before. It had interesting stuff on the container including a list of all the nasty stuff that wasn't in it. It's thick, like Greek yogurt. I liked it and will get more.

My mother would not approve of my potato salad. She would taste it and be polite, but I know she'd be comparing to her own. Mine would come up a faint second best. But you know, I haven't lived at home for a long, long time. I've been making potato salad for decades and each time I make it I follow my own taste buds. At first my potato salads and all the other comfort food dishes did taste like Mom's. Over time they evolved. Sometimes the changes came about because I didn't have the exact ingredients, sometimes because I had no reference to compare to. Mom lives far away and I don't get to enjoy her cooking much anymore.


And you know, when I do go home and eat a meal there, I compare her dishes to mine. And I wonder why what she makes doesn't taste like it used to.

[EDIT 05/01/17:  Google for some reason won't let me comment or reply to comments on my own blog!  So don't assume because I don't reply that I haven't read your comments!]

Posted by Mage Music by Lif Strand at 3:51 PM